Denver performing companies continue to forge new ground as leaders in collaboration and artistic inspiration.  We are experiencing an arts apex in Denver with poignant productions delivering powerful ways to look at  history, ourselves and the world around us.  Here are three important shows in Denver you really should see! 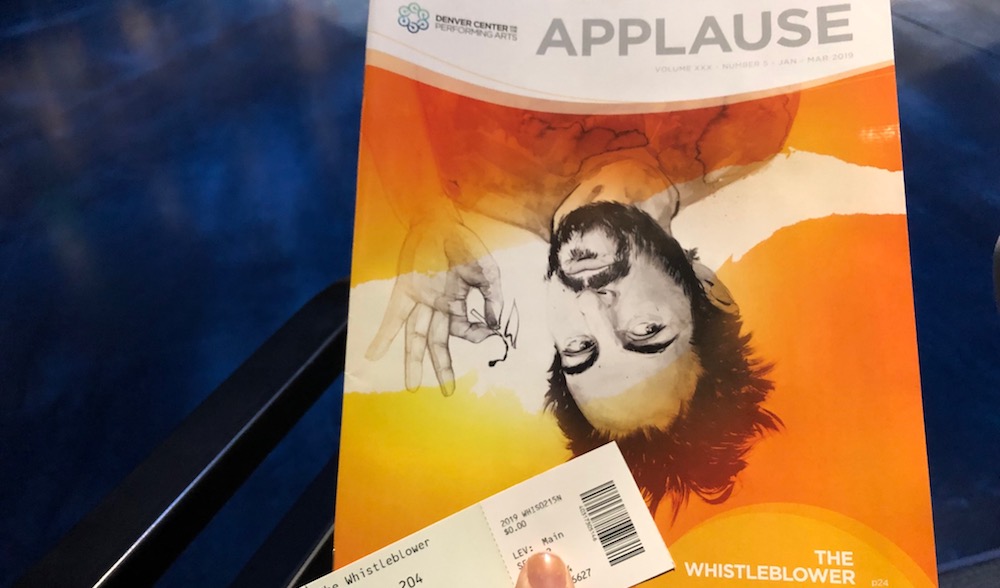 Denver’s status as an arts mecca is due in part to production companies taking greater risks, and Denver audiences receiving new work with thirst and enthusiasm. The Whistleblower is a trailblazing new show making its world premiere in Denver at the Space Theatre at Denver Center for Performing Arts. Whistleblower is an important show to see in Denver you really should see!

Surprisingly, the plot isn’t at all what I thought it was going to be.  Being a former employment lawyer, I figured the play was about workplace discrimination–you know, “whistleblowing.”   Seeing it for the first time on opening night with little background, I realized I was pretty far off.

The Whistleblower takes its audience on an unknown journey through the mind and thoughts of the main character Eli.  Eli is a Hollywood screenwriter who is “blowing the whistle” not only on his career, but on himself and the people closest to him.

The play begins when Eli is about to sell his script for a major television series.  Abruptly, he has a major “aha” moment that starts him spiraling down (or up) a road of spiritual clarity.  After driving all night to his childhood home, he continues his sleepless quest to serve up some hard truths to his family and friends.

However, this show isn’t only about Eli.  It forces us to examine our own truths and authenticity.  Through Eli’s journey, we find ourselves turning inward and looking at our own actions and intentions in a more clear and sincere light.

The age recommendation for the show is 17+ and contains a significant amount of adult language. I would agree with that recommendation 100%. This is not a show for kids.

To purchase tickets, and for additional details, visit the Denver Center online or call the box office at 303.893.4100.

There is also no shortage of stunning and impactful dance performances here in the 303.  Yet, even with an abundance of beautiful work, Tour de Force stand out for its rare collaboration celebrating the inclusion and diversity in Denver’s dance scene.

About three years ago, Colorado Ballet Artistic Director Gil Boggs decided to create a collaborative program that would feature three of Denver’s prominent dance companies working together to create new contemporary works. After juggling production, rehearsal and performance schedules of all three companies, this dream has finally come to fruition.

The program will open with a new work The MOVE/ment choreographed by Cleo Parker Robinson to jazz and soul music. Following will be Amy Seiwert’s Traveling Alone by Colorado Ballet, and closing will be a work choreographed by Wonderbound Artistic Director Garrett Ammon to Beethoven’s Creatures of Prometheus.

This is an incredible opportunity to bring a diversity of dancers, in both culture and genre, together to create a work that is reflective of these powerful times in our community and the world. The arts have always been a powerful catalyst for positive social transformation. This project is an inspiring representation of this collective vision.

THE DIARY OF ANNE FRANK

The Arvada Center for Arts and Humanities

The Arvada Center’s production of  The Diary of Anne Frank sparks a high level of curiosity, anguish and understanding that only exceptional theatre can do.  Directed by Christy Mountour-Larson, The Diary of Anne Frank shows an intense and intimate glimpse into the thoughts of 13 year old Anne, coming of age, as she and her family hide from the Nazis in an attic in Amsterdam.

Anne Frank wrote in her diary to understand herself and the horrors of being Jewish in Nazi-occupied Amsterdam. In writing down her most inner thoughts, she created one of the most powerful stories of the 20th century.  Today, the diary puts a face and a soul to the millions of Jews that perished in Hitler’s death camps during World War II.  As the one place for privacy, Anne’s diary held her fears, hopes, laughter and grief.

in spite of everything, people are truly good at heart

has provided inspiration and hope in humanity for over 75 years!

Based on Wendy Kesselman’s 1997 adaptation of the 1955 script by Hollywood screenwriting team Frances Goodrich and Albert Hackett, the audience sees the full Anne. She was imperfect, funny, longing to become a woman and hopeful for a future she would never see.

The Diary of Anne Frank is not original to Denver. However, Arvada Center’s poignant interpretation and unique production takes risks and forges new frontiers.  For example, at intermission the cast stays on stage for the audience to experience how the Franks could not leave the tiny space, or get fresh air, or grab something to eat or drink.

Big applause on the casting too!  Darrow Klein, Anne Frank, not only looks the part to a T, but she is phenomenally skilled and engaging! Through Klein’s performance, the audience is  completely transposed in time to to feel what it was like for Anne Frank during her 25 months of confinement.

Talk with a Member of the Cast

Before performances a member of the ensemble is usually in the lobby of the Black Box Theatre greeting guests and answering questions. Likewise, some cast members stay after the show for talk backs with informal discussion.

AC’s Black Box Repertory Theatre: Not One but Three Shows at Once!

Anne Frank is part of The Arvada Center’s third season of its critically acclaimed Black Box Repertory Theatre Company.   The AC Repertory actors have not only rehearsed for three shows at a time, but they will be performing three different shows in the same Black Box over the next few months: The Diary of Anne Frank (through May 17th), The Moors (through May 18); Sin Street Social Club (though May 19).

Performances take place Wednesdays at 1:00 pm, Thursday through Saturday at 7:30pm, and Sunday at 2:00pm, through May 17.

To purchase tickets, and for additional details, visit the Arvada Center online or call the box office at 720-898-7200.

While these are three important shows you really should see in Denver right now, there are many making a meaningful mark.  I would love to hear from you about other Denver shows that have moved you.