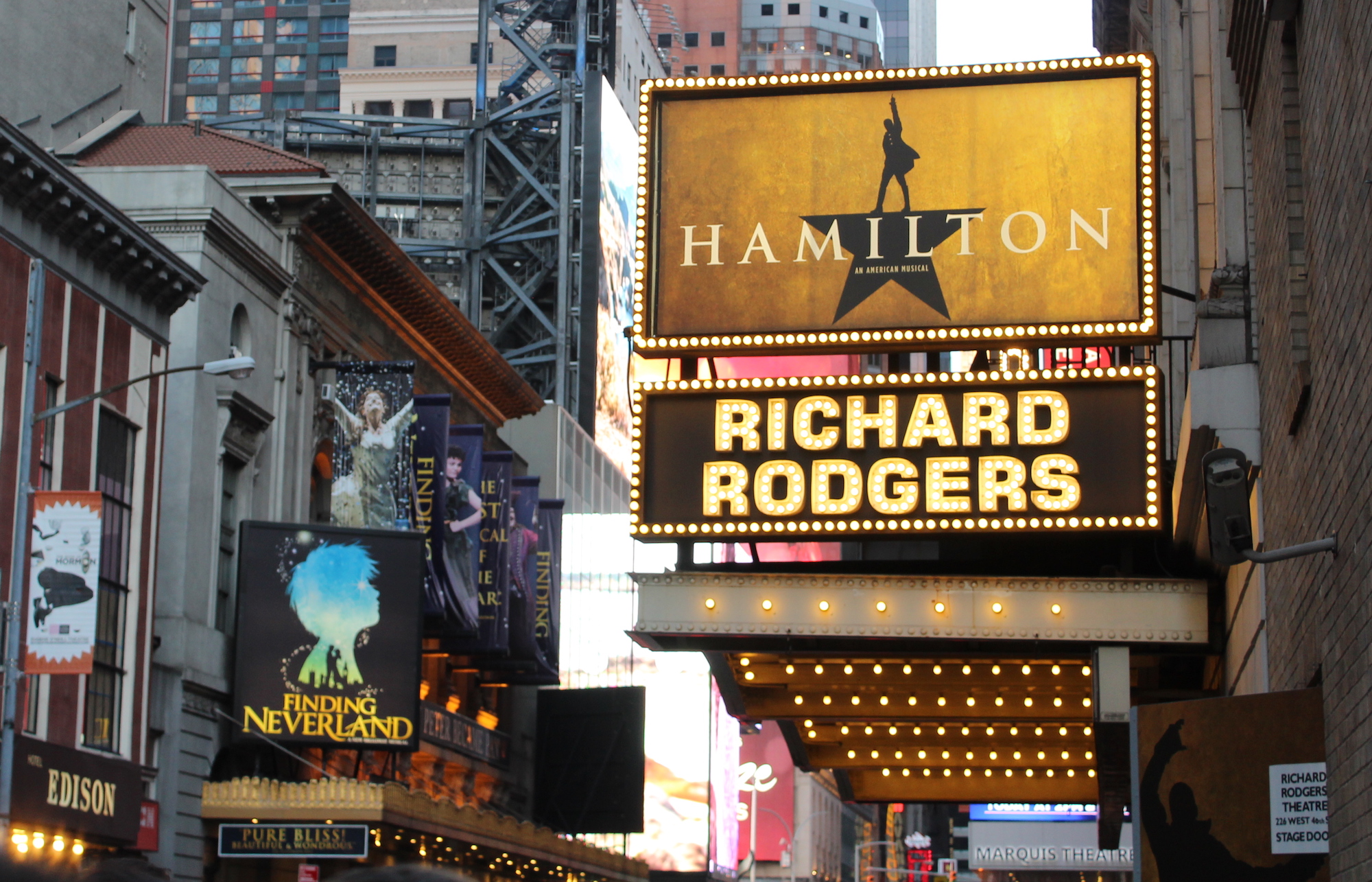 Hamilton is coming to Denver in 2018!  The question on everyone’s mind is, “how do I get tickets?”   I sat down with Janice Sinden, the new President and CEO of the Denver Center for Performing Arts (DCPA), to ask this question and others.

Before becoming CEO of the DCPA, you were Mayor Hancock’s Chief of Staff. How does your previous work at the City help in your new role at the DCPA?

My time with the City really gave me a complete appreciation for how unique Denver is and the 79 neighborhoods that comprise our community.   I think that our arts and cultural commitments in the 7 county region are paramount because of the SCFD (The Science and Cultural Facilities District). The SCFD really put us on the map and is where government and taxes support arts and culture to deliver a vibrant community.

The Mayor and his beauty and public leadership showed me how to really embrace and love community.

Were you involved with Mayor Hancock’s Imagine 2020 initiative and what is it?

Sure. Mayor Hancock, being married to an artist himself, Mary Louise Lee who is an actress and singer, had a keen eye on where arts and culture in our community are and where they need to go. So, when he came into office 5  1/2 years ago, it was after he had been on Council for 8 years, and had continued to see funding for the arts decrease over time.

One of the first initiatives he kicked off was developing an arts and culture plan for Denver.  That was managed by Arts and Venues, an important subdivision of one of our cabinet agencies in the City.  Arts and Venues reported to me, so I was involved in that capacity.

What is  THE NEXT STAGE project?

The next stage is another Mayor Hancock initiative led by Arts and Venues.  It is an effort to capitalize on the fact that we have one of the most robust performing arts complexes in the county: symphony, opera, ballet, performing arts and events.  There has been a lot of imagining of what the complex can be, and now we are getting into the nuts and bolts of what type of activation and what type of development would be appropriate for this complex, all the while making sure that the four resident companies, symphony, opera, ballet, and performing arts, are paramount to whatever is done.

What are the next steps for the project?

There are subcommittees that have been set up to talk about how would we fund the project…what would happen when and if development is pursued on the complex..what kinds of organizations are going to be invited to perform…and what is activation in general? A lot of that work is being conceptualized right now.

The real question is the funding. Is there enough capacity in this city to make funding a priority right now on this complex?  We have the Great Hall development at DIA; the National Western Stock Show redevelopment on Brighton Boulevard; the 80,000 square foot expansion of the Convention Center, and a lot of work is being done on the redevelopment of the 16th Street Mall.  So, to take on another major redevelopment project is going to be expensive.  I think there is a lot of interest in this, but we just have to make sure we don’t overextend the city.

What does it mean to you to be the first female CEO at DCPA in its 40 year history?

It’s interesting that you ask. It wasn’t something that I was initially very mindful of.  Being the first female wasn’t such a big deal.  But now that I am in it and I look at my peers in other cities across the country, I see

there really aren’t a lot of women that are leading performing arts organizations.  So, I think it is a bold move, but I also think that times have changed and that it is less top of mind.

For me, I bring a different lens. Everyone knows I don’t come from theatre.  I’m just a die hard lover of it.  I am hoping I bring a real strong business acumen to support our artists and the work they do.  If we have a really well oiled operation, then we will have the resources to continue to be the best we can be.

Is it true the DCPA is the largest theatre complex in the country?

We have 8 theaters we utilize.  There are two in the Broadway space: the Buell  (2800 seats) and the Ellie (2200 seats).  Then there is the Garner Galleria, which is a cabaret theater (around 200 seats). On the theater company side in the Bonfils Building there are four theaters: the Ricketson which is the Proscenium Theater-a former movie theater (250 seats); the Stage Theater which is our largest in the Theater Company family (750 seats);  The Space Theater, a theater in the round, currently under renovation, will reopen this summer (550 seats); and the Jones Theater -about 170 seats. Then, in this building which we own entirely. This is not part of the City’s properties, its the Newman Building that we are in right now.  The third floor is dedicated to education and has a conservatory theater (around 250 seats).

What are some upcoming shows you are excited about this season?

In about two weeks we will have An American in Paris. It’s just such a beautiful musical, a love story that is a classic.  So, we are really excited we will have that.  Another one that is noteworthy in this season in the Theater Company is The Secret Garden.  It’s a tough story about a child losing her parents and that experience, and is great for families and for our young audiences. I was down talking with Jan who does the costumes, and she is so excited.  It will be such a beautiful production.

Our education program does  a community and school program called Shakespeare in the Parking Lot. This year they are doing a Midsummer’s Night Dream. It is so wonderful to go into the schools and meet the youth where they are, and tell these classical 400 year stories that are just as relevant today as they were then.  So, that’s a neat one!  (Learn more about Shakespeare in the Park in Denver I Love’s  Interview with Allison Wattrous, Director of Education).

Also this season we have the world premiere of Frozen, before it goes to Broadway. They (Disney) LOVE opening their shows here.  We did the pre-Broadway opening for the Little Mermaid, and we launched the national tour of Lion King.   Frozen will be here late summer.  Subscribers have already had the pre-sale purchase opportunity, and the tickets will go on sale to the public in April.

Can you tell us some of the details about Hamilton coming next season:

Obviously Hamilton is a blockbuster. It will be with us for 5 weeks, about this time next year.  So, I’m really excited about the opportunities, the story telling, how relevant it is to the times that we live in.  We are in a political environment. So, we are really excited to be among the first cities in the country to be able to showcase this amazing story.

How do we get tickets to Hamilton?

That is a great question. We had the best subscription year the company has ever seen–because Hamilton is so exciting.  We have just about 28,000 subscribers.  People who subscribed for the full Broadway series in 2016-2017 have the first right to subscribe for next year. So, they will get the tickets first.

(Note:  The DCPA has released the shows and dates for the 2017/18 season but has not announced other sale or pre-sale details. Specific pre-sale details should be announced soon. Hamilton will be in Denver February 27 through April 1, 2018).

Will subscribers have an opportunity to buy additional tickets to Hamilton?

We won’t have the opportunity to buy big blocks of tickets, but subscribers may have the ability to buy additional tickets. We are working on that now. We won’t have group sales and aren’t giving any tickets away.  That is hard because we get hundreds of a requests every month for non profits that send charity opportunities, but this is one we just won’t be able to because of the demand. We are going to be very mindful of pricing though.

How does Denver get so many “A” shows like Hamilton and Frozen that other cities don’t get?

I think the reason Denver gets the opportunity to show some of the most amazing Broadway shows is multifaceted: its the venue, the staff and the audience.

We have beautiful venues.  Between the DCPA who put forth the first money with the Helen Bonfils Foundation to build the Complex and then to give these wonderful assets to the City, they are like no other theaters.

You can go to the Lincoln Center and what not, and I think our theaters rival any of the major theaters.

John Ekeberg is the Executive Director of our Broadway Division.  He has been here since 1992.  His relationships when he goes to New York are like family.  He is on the Broadway League and a Tony Award judge.  It is all about relationships.  They know we will deliver and every single “i” will be dotted and every “t” will be crossed, so they love coming here.  We also have the best audiences.

Our audiences are active and vibrant, and they come.  We fill the houses. Last year we engaged 1.2 million people in the theater, and that’s really exciting!

What do YOU love most about Denver?

I love the people of Denver the most.  The big hearts, the compassion, cutting edge, visionary, risky, outdoorsy. Its the people.  They live large, and they love hard.  It’s the people.

Last Question: What do you love most about the DCPA?

It’s the people.  It’s the audience.  At the DCPA you see little children coming to have their first experience or our aging  population that this is the thing they look forward to most.  Its the people. The actors and costume designers love their work.  They love getting up every day, and they are inspired to come to this amazing place and make magic.

You can also learn more about the 2017-18 Denver Broadway line up by clicking HERE.  See you at the theater!