As the season changes, so do many of the great summer exhibits and shows in Denver.  Here are 10 shows and exhibits that are so extra special you really need to see them before they go away!  From theater to concerts; art exhibits to architecture; and of course lots of food and drink – here’s the inside scoop from Denver I Love. 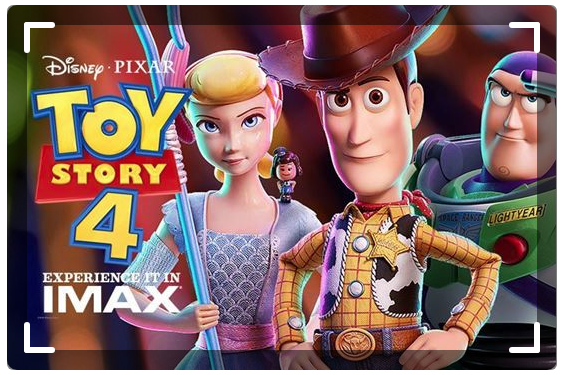 Toy Story 4 received rave reviews, and everyone loves the new character Forky – who started his life as a spork and became the most loved toy in the pack.

Watching the animation changes and technological advances from Toy Story 1 to Toy Story 2 are stunning, especially on the big IMAX screen!  Pixar isn’t the only one keeping up with the times. A fun thing about Denver’s IMAX are the free water bottles that are aluminum and reusable!  To enhance its commitment to building an empowered community that loves, understands, and protects our natural world, the Denver Museum of Nature and Science has eliminated single-use plastic completely.

…and that’s not all Toy Toy Story fans – shout out to my dear friend and roommate from college, Jody Weinberg, who I always love seeing in the Pixar credits!  See if you can find her during the funny and fun credits at the end. Jody is one of the rare members of the Pixar team to work on all 4 Toy Stories.

2. THE MOST AMAZING SCULPTURE EXHIBIT AT THE BOTANIC GARDENS 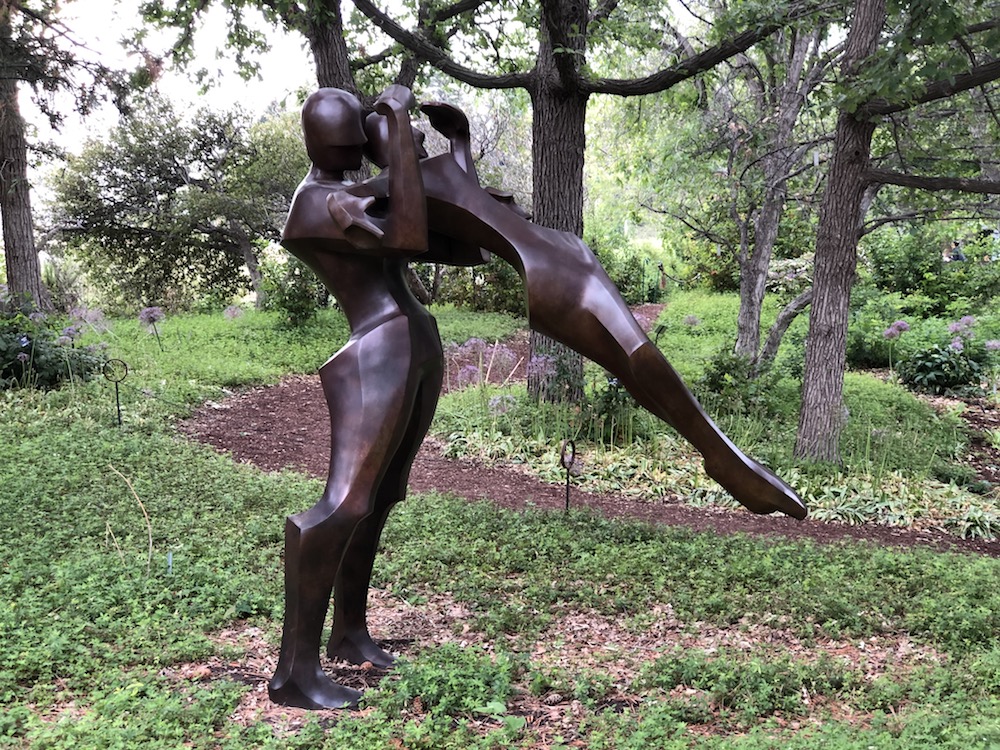 Denver Botanic Gardens has the MOST incredible art exhibits! Think back: Chihuly, Deborah Butterfield and Alexander Calder. The current sculpture exhibit, Human Nature: Figures from the Craig Ponzio Sculpture Collection, is one of the best I have seen!  While it has been showing since April, this is the very last weekend to see it!

What makes this exhibit so special?  First, the collection features pieces by an incredibly diverse group of artists from the most famous, such as Auguste Rodin, to local Colorado artists, like Kendra Fleischman. Also, you will find neoclassical mixed with modern, and, European mixed with American. Furthermore, the sculptures are spread throughout the gardens. So, it is fun to walk through and try to find all of them.  It took me a few trips around to not miss any.

3. CHICAGO AT DENVER SCHOOL OF THE ARTS 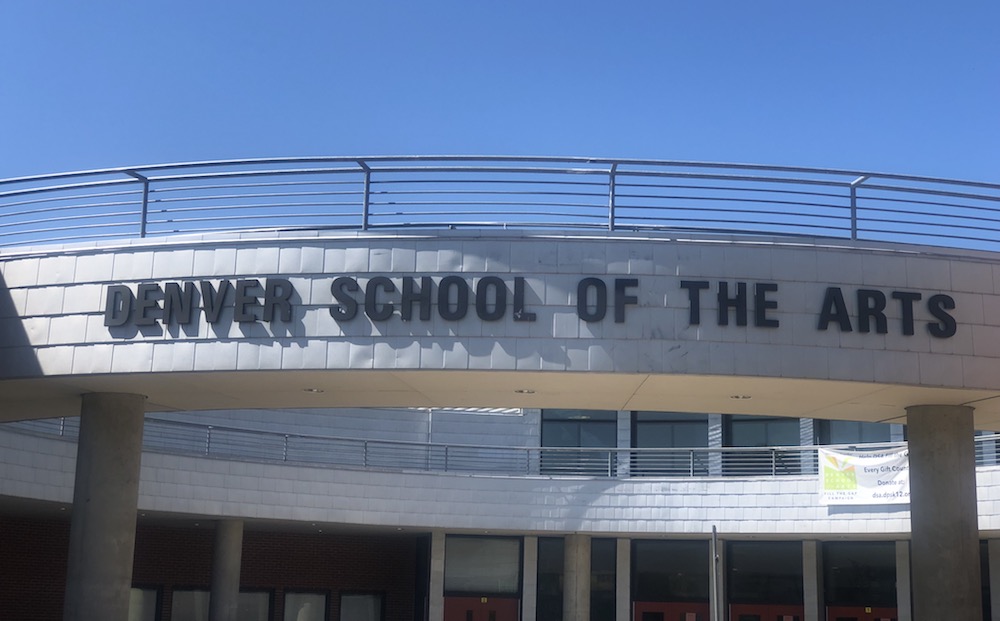 Denver has gained quite the reputation for its amazing arts education and long history of sending top tier talent into the world.  Catching the annual All-School Musical at Denver School of the Arts is always special! This year’s production of the fosse hit Chicago does not disappoint! Tickets are sold out. However, if you go at 6pm to the box office, they will release a few more seats as space permits.

Denver School of the Arts, commonly referred to as DSA, is an audition based arts magnet school (grades 6-12) in Denver Public Schools. The school is highly competitive in that every year thousands of students audition for a small number of coveted spots.  DSA boasts many famous alum including world class musicians, dancers, Broadway actors, directors, writers, set designers and visual artists.  You never know if you are watching the next Meryl Streep – and with the amazing cast of Chicago, you just might be!

4. MISS SAIGON AT THE DCPA 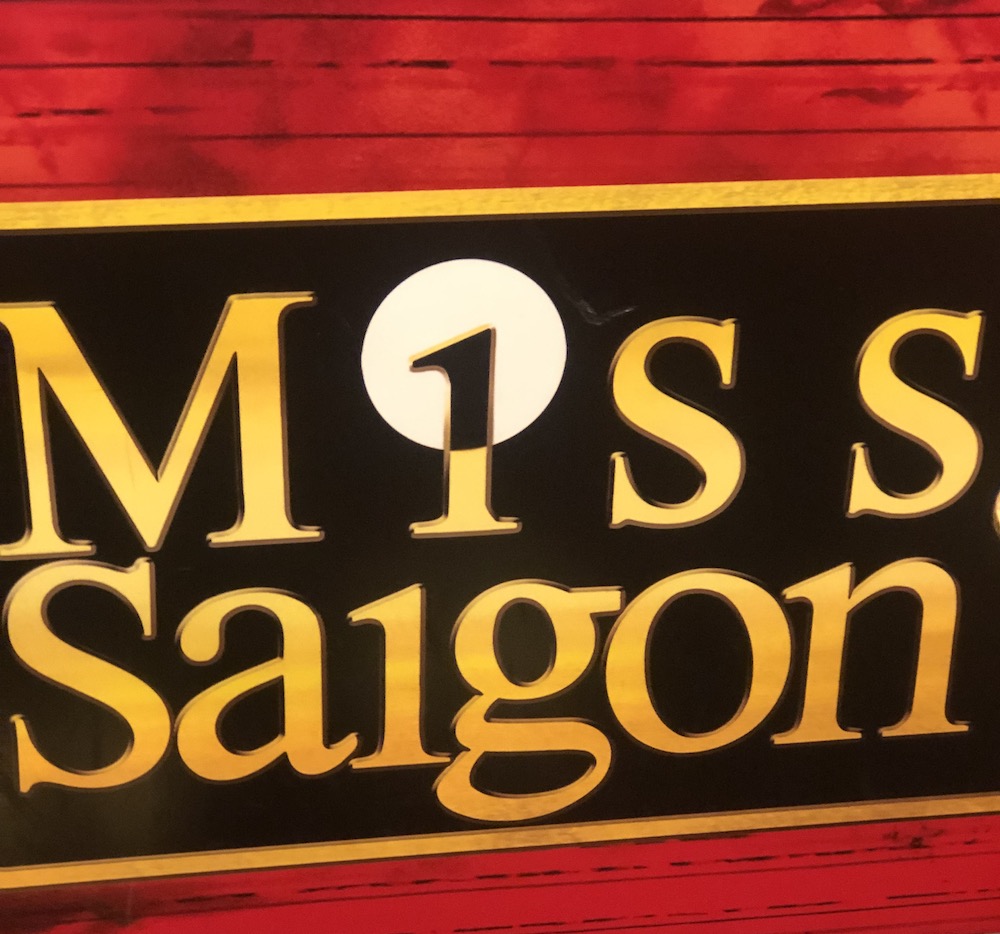 Another hot ticket this week is Miss Saigon at the Denver Center for Performing Arts.  The national touring cast for this show is brilliant!  It is one of those really BIG Broadway productions…big talent, big songs, big set and big impact!  Every role is cast perfectly from the biggest roles to the supporting ones. The performance by Red Concepcion, the Engineer, is especially notable. If you are only going to see one show this season…this is it!  This isn’t a show for younger audiences though.

Miss Saigon is the story of a young Vietnamese woman named Kim (played by Emily Butista) who is orphaned by war and forced to work in a bar run by a notorious character known as the Engineer (played by Red Concepcion). There she meets and falls in love with an American G.I., Chris (played by Anthony Festa), but they are torn apart by the fall of Saigon. For 3 years, Kim goes on an epic journey of survival to find her way back to Chris, who has no idea he’s fathered a son and has remarried (Chris’ wife Ellen is played by Stacie Bono).

The show has some of  Broadway’s greatest hits like “The Heat is On in Saigon,” “The Movie in My Mind,” “Last Night of the World” and “American Dream.”

Did you know the DCPA is the largest not for profit theater organization in the United States?  No wonder, the DCPA attracts the nation’s best talent!  When it comes the amazing theater, Denver is certainly on the map every which way! 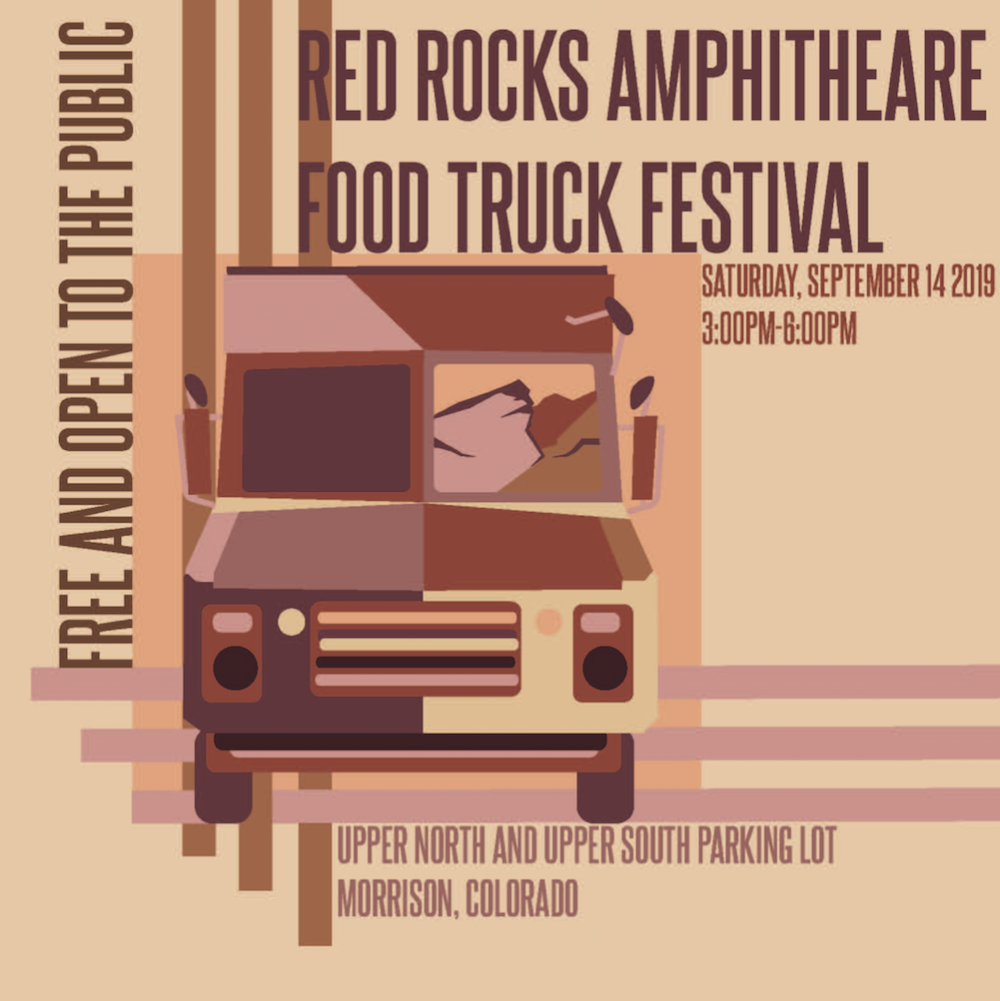 Sadly, most of the fun food truck festivals are winding to an end. However, Red Rocks Amphitheater’s food truck festival happening THIS WEEKEND will give our taste buds one last hurrah.  I know this story is about shows and exhibits, but a food festival is pretty much a show and exhibit at the same time, right?  Taking place in the upper north and upper south lots at Red Rocks, the Food Truck Rally will feature lots of food, drink and music!

6. BRIGHT STAR AT THE ARVADA CENTER 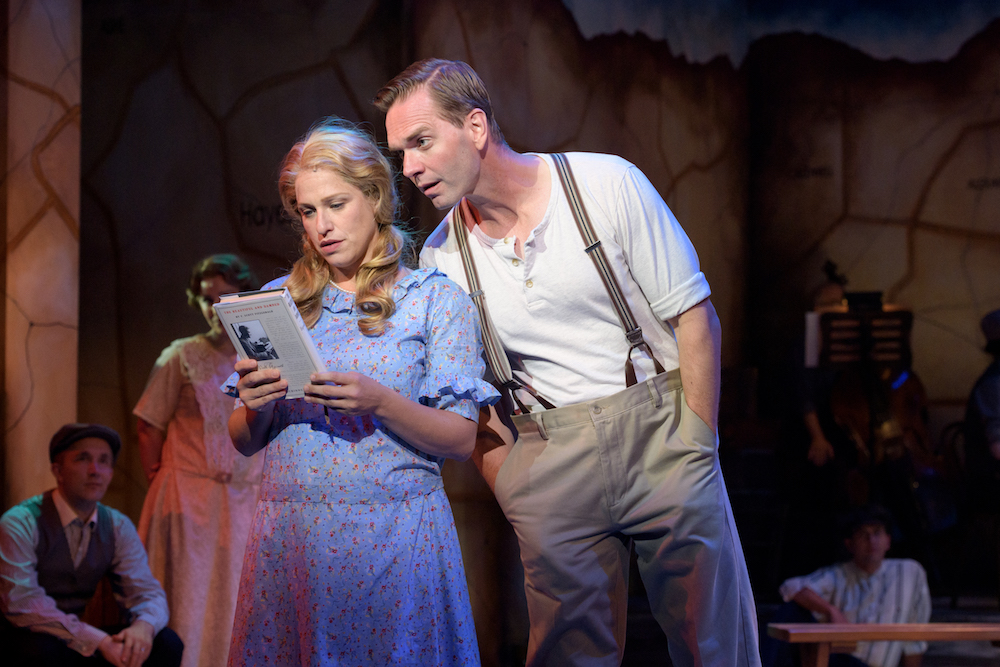 The Arvada Center for the Arts and Humanities launched its 44th theatre season with the regional premiere of Bright Star, playing through September 29th. Set in the Blue Ridge Mountains of North Carolina and inspired by a true story, Bright Star illuminates the great American tradition of storytelling with a dramatic and emotional tale of love, regret, and understanding.

Written and composed by Steve Martin and Edie Brickell, Bright Star features an Americana and bluegrass-infused score that ranges from heart-piercing ballads to up-tempo numbers that hearken back to old-time American dance music.

“A lot of what makes Bright Star enjoyable is in the emotions the characters get to explore through their journey and the songs,” says Producing Artistic Director of Musical Theatre and Director of Bright Star, Rod A. Lansberry. “There’s a close-knit sense of how these characters are connected because of the respective journeys they take and the music serves to deepen that emotional connection.”

The Arvada Center is known for giving audiences an intimate and up close experience – especially with the fabulous talk backs after certain shows.  There is still time to catch a talk-back opportunity for Bright Star on the following performances: 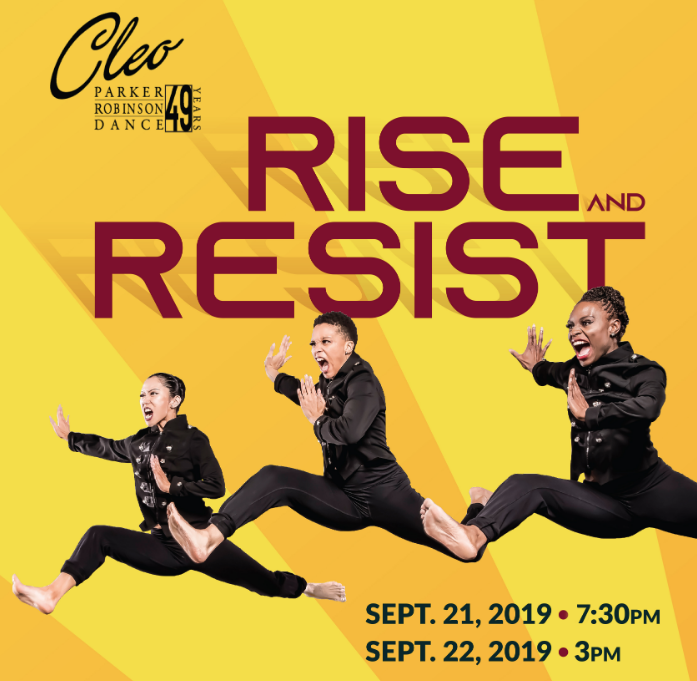 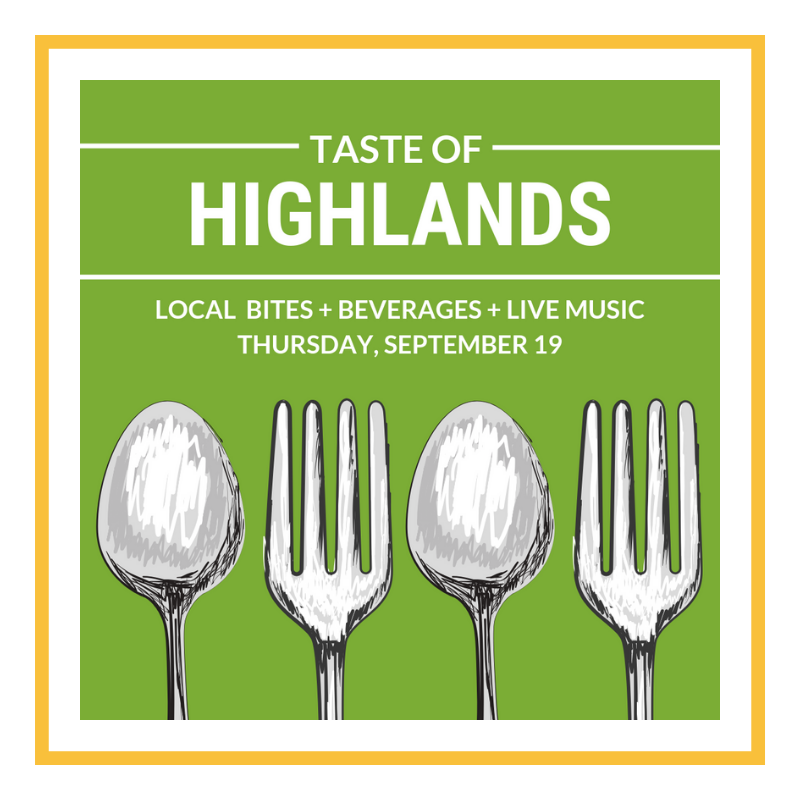 Another great food festival happening in the next week is Taste of Highlands. When seeking out a hotspot for fabulous restaurants, its hard to beat Northwest Denver! The 7th annual Taste of Highlands will feature many favorite restaurants from Northwest Denver like: Revelry Kitchen, the Wayback, Happy Bakeshop, Himchuli Indian & Napali Cuisine, Vital Root, Sartos, Sweet Cow, Duo, and Sushi Hai.

The event, hosted by the Highland Merchants Association, will be zero waste and benefit the We Don’t Waste food recovery program. The evening will include live music from Woodshed Red. General Admission tickets are $40 and include unlimited tastes and access to the event. VIP tickets are $60 and include two drink tickets and a commemorative glass.

9. ROCK ON THE MUSICAL CHAIRS AT THE DENVER ART MUSEUM: LAS MUSIDORA 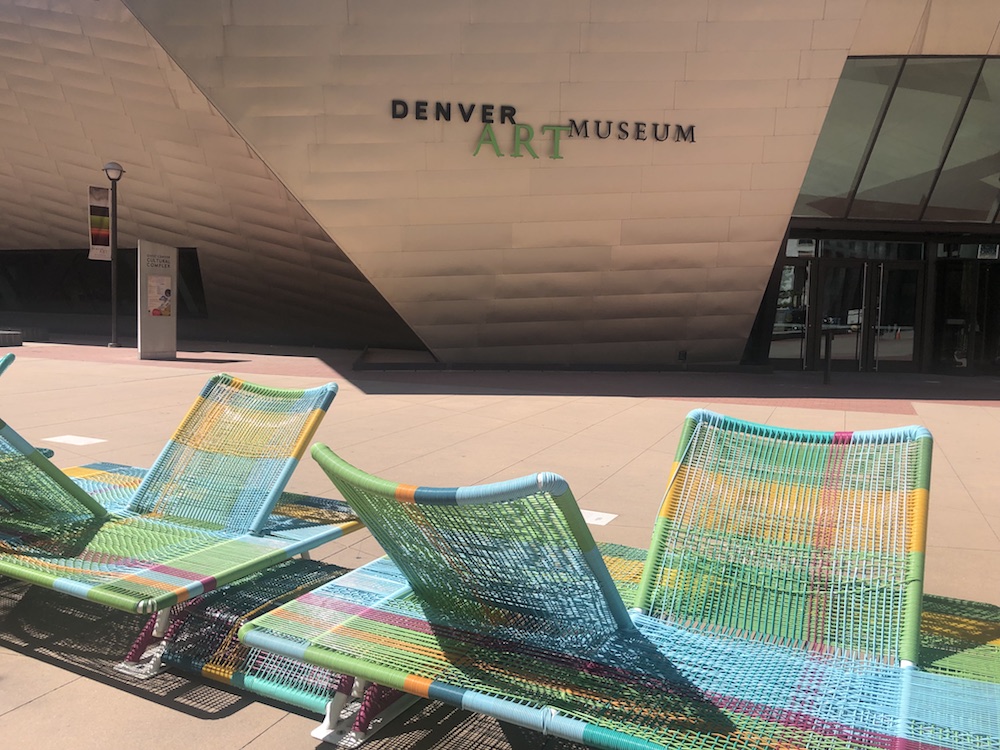 “La Musidora,” combining the Spanish words for music (las música) and rocking chair (la mecedora) is an interactive outdoor art installation in front of the Denver Art Museum. The rocking chairs make musical sounds when you rock back and forth, seating 20 people at at time. Designed by Hector Esrawe and Ignaio Cadena from Mexico City, the musical chairs are woven in beautiful colors and textures.

This dynamic installation, created special for the Denver Art Museum, has also served as a canvas for Denver’s weaving community.  If you can make time over the next couple weeks to go rock, you will really enjoy it!

Where: All over Denver, with a special neighborhood focus for 2019 at Center for Visual Arts, Su Teatro and Museo de las Americas.
Last Day: SATURDAY AND SUNDAY, September 21st and 22nd, 10am to 4pm
Tickets:  Most events are free.  Special tours are $12 a person.  Tickets can be purchased through DenverArchitecture.org.

The Art District on Santa Fe will host an expert-led insider tour for Doors Open Denver (DOD) September 21 and 22nd. There are also self-guided tours and access to many spaces the public would not otherwise see.  This year presents a wonderful opportunity to learn the history behind the featured neighborhood: the La Alma/Lincoln Park community and discover some of Denver’s most incredible artists in the area!

There are three locations for the neighborhood activities: Center for Visual Arts at 955 Santa Fe Drive; Su Teatro at 721 Santa Fe Drive and Museo de las Americas at 861 Santa Fe Drive.  In addition the Byers Branch Library will serve as a mini DOD headquarters on Saturday only.

Doors Open Denver 2019 will feature overall 52 FREE open sites and 110 Insider Tours (Cost $12) and 5 Cultural Events!  Many of Denver’s greatest historic sites will be opening their doors for the event: Union Station, the Black American West Museum & Heritage Center, the Byers-Evans House, the Cass Mansion, Cathedral Basilica of the Immaculate Conception, Denver Firefighters Museum, the Governor’s Residence, the Lumber Baron Inn, Rockmount and the historic Sugar Building – to name just some.  Click here for the full list of site locations.

Doors Open Denver is an annual 2-day event that celebrates Denver’s architecture and design. Each year the Denver Architecture Foundation inspires the community to connect with Denver’s unique spaces and hosts dozens of tours by local experts.  The expansive tour schedule can also be found in the DOD Event Guide.