Denver does Martin Luther King Jr. Day right!  Thank you to city leaders, artists and historians of today and yesterday for ensuring meaningful ways to honor Dr. King’s legacy.  Here are a few Denver I Love picks for commemorating MLK Jr. Day in the Mile High: 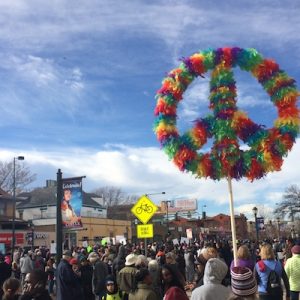 When: Monday January 21, 9:30 Pre-Marade Program; 10:45 Marade begins; 1:00 pm Festivities end
Where: Start at Denver City Park in front of the “I Have a Dream” Memorial;  End at Civic Center Park Greek Theater

Denver’s Martin Luther King Jr. Marade is one of the largest MLK celebrations in the nation.  The theme of this year’s event is “We Cry Freedom.”

Thousands of marchers and state and city leaders will start gathering one hour prior to the start of the Marade for a program at the base of Denver’s Dr. Martin Luther King, Jr. “I Have a Dream Monument.”

The Marade route goes from City Park south down the Esplanade by East High School, west onto Colfax Avenue, and proceeds to the State Capitol- a total distance of 5k.  There will be a program with speeches and cake immediately following the Marade at Civic Center Park’s Greek Theater.

As we know from last year, the Marade will march on whether rain, or sleet or snow.  Lucky for us though, this year’s forecast is much sunnier and calling for mid 50s temperatures.

The history of the Marade is one that can make all Denverites proud of our statewide leadership.  This year will mark the 33rd anniversary of the holiday honoring Dr. Martin Luther King in Colorado. On April 4, 1985, Colorado Gov. Dick Lamm signed the legislation making the birthday of Dr. King a Colorado holiday.

It was Wilma Webb, then State Senator Webb, who spearheaded the formation of the Marade when her husband Wellington Webb was serving as Mayor of Denver. Prior to 1985, both Mrs. Webb and Mayor Webb had spent years trying to make Dr. King’s birthday a state holiday.

The name “Marade” combined the words “march” and “parade” to symbolize a combination of words meaning “to demonstrate” and “to celebrate.”

The Marade today is organized by the Dr. Martin Luther King Jr. Colorado Holiday Commission.  The purpose of the Statewide Commission is to unify and educate communities within the State of Colorado and encourage appropriate observations, ceremonies and activities in commemoration of the holiday. 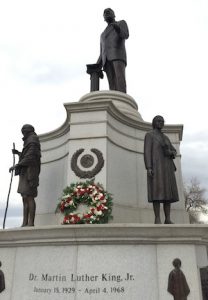 Visit Denver’s “I Have a Dream” Monument

Going skiing this weekend or can’t make the Marade? Visit Denver’s Martin Luther King Memorial anytime!  This larger than life memorial -26 feet tall- really is something everyone in Denver should go see!

The pedestal, made of Sierra White granite, is the base for an almost 3 meter tall statue of Dr. King.  Dr. King stand on top, symbolically on the shoulders, of four other influential historical figures who inspired Dr. King along the way: Rosa Parks, Sojourner Truth, Frederick Douglas and Mohandas K. Gandhi.  The panels around the memorial highlight historical dates and quotes about civil rights and Dr. King’s dream.

The multifaceted and talented sculptor and engineer Ed Dwight has created notable public memorials and public art around the world, but the Ed Dwight Studios are right here in Denver at 3824 Dahlia Street. 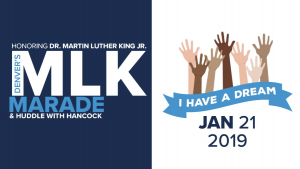 Mayor Michael Hancock will be gathering with Denverites before the Marade festivities get started. The huddle will happen just east of the “I Have a Dream” Memorial inside City Park at the Esplanade on 17th Avenue. No RSVP necessary. Just show up! 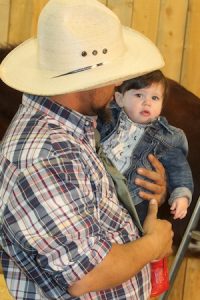 If you haven’t made it to the stock show yet, Monday night is a great time to go.  The MLK Jr. African American Heritage Rodeo of Champions aims to not only entertain but to educate how African American cowboys and cowgirls impacted the West throughout history.

Purchase tickets online at nationalwestern.com, by calling 1-866-464-2626 or at one of three local ticket outlets. The Rodeo will also feature Frontier Airlines Mutton Bustin’, always a crowd favorite!  Plan to go early because your ticket to the rodeo includes grounds admission for the day of the event.  Parking is free in National Western lots.

There is still catch the last performance of CSO’s Dvorak Symphony No. 9 with conductor Brett Mitchell.  Three prominent composers: Aaron Copland, Joseph Schwantner and Antonin Dvorak reflect on their observations of America from the Civil War to the civil rights movement.

MLK, Jr. Day is a great opportunity to take a trip to Denver’s Black American West Museum.  The museum is housed in a Victorian home in Denver’s Five Points Neighborhood filled with artifacts telling the story of African-Americans in the Wild West.  On Monday the museum is showing a PBS documentary film paying tribute to nonviolent civil disobedience starting in the early 1940s.  Tickets are free but RSVP is required and donations are encouraged.

Note: Denver Public Libraries will be closed in observance of MLK, JR. Day, so be sure and pick up your Dr. King reading, like the great library book featured above, before Monday.