When is the best time to visit Denver’s City Park? Winter, Spring, Summer and Fall!  With the stunning backdrop of the Rocky Mountains and the downtown Denver skyline, the setting is one of the best in town.  Denver City Park has 330 beautiful acres of water features, gardens, playgrounds, paths, recreational fun and outdoor art. It is a top Denver destination for all ages.

Over the years, I’ve been fortunate to spend a lot of time in the park watching tennis, listening to live jazz, supporting local charity races, playing with kids and walking with friends. Accordingly, with each visit I grow more enamored by the history and grandeur.

In this story, I will share my top ten highlights along with a lot of fascinating Denver history you might not know.

The crown jewel of the park is the area known as the Pavilion, Band Stand and Boathouse.  Denverites refer to this area as just “the Pavilion.”   This Pavilion is listed on the US National Register of Historic Places.

The Pavilion was designed in 1882 by two of Denver’s most famous architects:  John Humphreys and William Fisher. The original structure was rebuilt in 1929, and in 1992 the Pavilion underwent another refurbishment.  Designed in a Spanish-style, the Pavilion opens to the lake on the east and sweeping mountain views to the west. Guided tours are available as well as private bookings. You can visit the City’s website to schedule a tour or rental.

The adjacent Band Stand holds a historic and modern day significance all of its own.  The first bands to perform on the Band Stand date back all the way to 1859. By 1890, concerts in City Park became a weekly event, and bands like the Denver Municipal Band entertained thousands of Denverites.  Fun fact: The Denver Municipal Band is the oldest professional concert band in the entire United States!

The century long tradition continues with weekly summer concerts and “Jazz in the Park.”  We eagerly await the end of Covid so the music can play on.

Ferrill Lake is the large lake toward the east of the park and in front of the Pavilion.  The lake has a walking/running path that goes around the whole perimeter, and the lake itself provides fun recreation in the warmer months like paddelboating, fishing  and surrey rides. The City periodically stocks the lake with Largemouth bass, catfish and carp. Therefore, it’s common to see someone pulled up along the edge of the water with a lawn chair and fishing pole.

The lake, once called “Large Lake,” has an interesting history.  Manufactured in 1896, the lake is not a natural one.  In modern times, the lake was renamed Ferril Lake after a Denver poet and journalist who lived near City Park, Hornsby Ferril.  Ferril was named Poet Laureate of Colorado in 1979 and known as “The Poet of the Rockies.”

Another great story I love is a recurring tale about the lake’s fountain. In 1907 Mayor Robert Speer pushed to build a fountain in the lake before the 1908 Democratic National Convention in Denver.  About a century later, Mayor John Hickenlooper (now Senator Hickenlooper) worked to get the fountain up and running before the 2008 Democratic National Convention. By repairing the fountain in 2007, the lake once again flowed with water and beauty.

Located near 23rd and York, City Park maintains 16 tennis courts.  Nearby Denver East High School uses the courts for its award winning tennis teams to practice and hold matches after school.  If you are a player, City Park also hosts a number of USTA teams throughout the year. The courts are well equipped with lights and were recently refurbished within the last couple years. To register for one of City Park’s USTA teams or to learn more about using a court, call  720-913-1311.

Winding your way east from the tennis courts at the north side of the park, you will find Duck Lake, circa 1882.  The lake runs along the Denver Zoo property but doesn’t require the zoo admission fee from the park side of the lake.  Duck lake has nice benches to sit down and is a fun place to see several species of birds and ducks. The lake was designed with an island in the center to provide breeding ground for the birds. The most common species you will find at Duck Lake are Double-crested Cormorants, Black-crowned Night Herons. Wood Ducks, sparrows and lots of Canadian Geese! 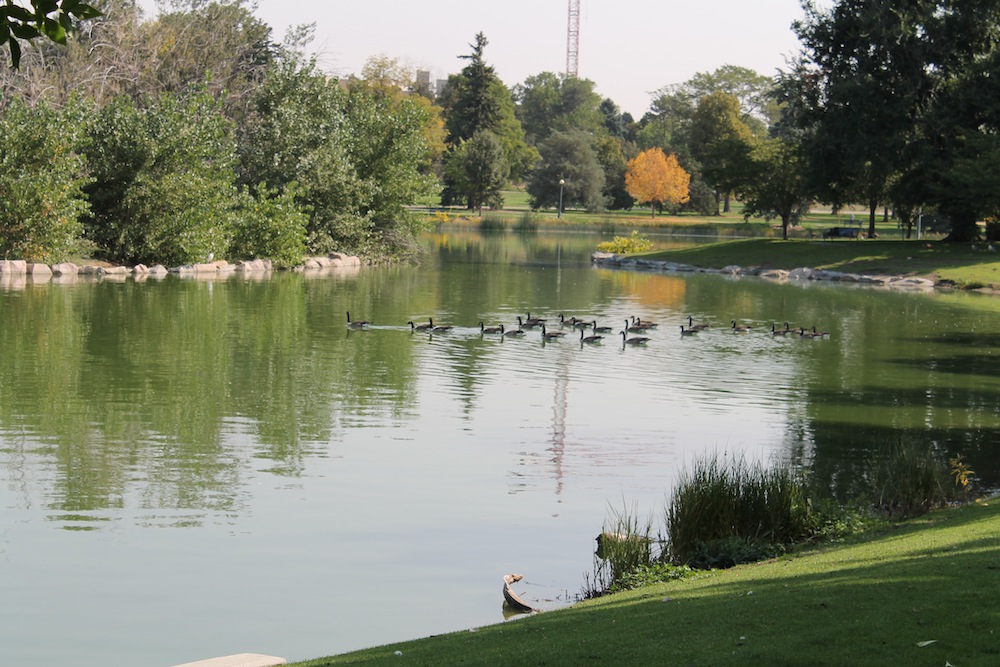 One of the things I love most in City Park is a newer large memorial devoted to Dr. Martin Luther King, Jr. and other great civil rights leaders. The statue was designed by Denver sculptor Ed Dwight in 2002. In the center stands a 8 ½ meter tall statue of Dr. Martin Luther King surrounded by other statues of Rosa Parks, Sojourner Truth, Frederick Douglass and Mahatma Gandhi.

On the pedestal below Dr. King are two bronze reliefs highlighting the history of African Americans from the time of slavery through the civil rights marches of the 60s.  The etchings show: the Charleston, South Carolina Slave Auction; the Union Army’s all-Black First South Carolina Regiment entering Charleston; African American legislators working on civil rights laws; the rise of the Ku Klux Klan; the great northern migration; the integration of the schools; bus burnings and brutalizations of civil rights demonstrators; and the hope of civil rights marchers of the 60s.

Large tablets around the pedestal provide a timeline from slavery to Dr. King’s March on Washington. The tablets also feature quotes by Dr. King that you will want to take time to read and be inspired by.  Another notable feature of the memorial is the bronze Liberty Bell that stands on the north side of the memorial and the bronze outline of a slave ship that can be found on the south side.

The memorial was commissioned by the people of Denver under the leadership of Mayor Wellington Webb, First Lady Wilma Webb, and City Council, of which Senator Joyce Foster was President a the time.

Denver’s annual Dr. Martin Luther King Day “Marade,” kicks off from this memorial and stands as a symbol of inspiration, strength and peace for all of Denver.

Restored by sculptor Gladis Coldwell Fisher in 1948, Coldwell Fisher performed the restoration by making casts of her own children. The fountain, orginally named the Dusseldorf Fountain, after the sculpture it was created after in Dusseldorf, Germany, quickly became known as “The Children’s Fountain” around 1919.

You can find the fountain at the southeast side of Ferrill Lake.

Towering over the main entrance of City Park at 17th and the City Park Esplanade is an iconic marble fountain and colossal bronze figure representing the State of Colorado.  The figure depicts a woman holding a sword and shield of the State.   Surrounding the robed woman are three smaller figures representing the virtues of the state of Colorado: Loyalty, Learning and Love.  Artist Lorado Taft built the memorial in 1918, and it stands beautiful and proud to this day.

At the far east side of the park, next to the Nature and Science Museum is a life-size mastodon commemorating one of the greatest scientific discoveries in Colorado from only 10 years ago.   What is a mastodon you ask? Mastodons are any species of extinct proboscideans in the genus Mammut, related to elephants, that inhabited North and Central America during the Ice Age 10,000 to 11,000 years ago.

In 2010, construction workers were building a reservoir dam to supply water to Snowmass Village up in the mountains. The construction crew uncovered fossil bones that turned out to belong to a young female mammoth. According to Denver’s Nature and Science Museum, further excavation unearthed an extraordinary, well-preserved Ice Age site with remains of more than 50 animal species, including the largest accumulation of American mastadons ever found.

The life-size mastodon sculpture was commissioned by the Nature & Science Museum and constructed by artist Kent Ulberg in 2014 to honor this huge find in Snowmass, Colorado.  The Snowmastodon stands 19 feet tall and weighs over 5,000 pounds.

The Dustin Redd playground was built in 1996 in memory of Dustin Redd, who tragically drowned in Ferril Lake.  The wooden playground was a beloved part of the park and is in the process of having an exciting and much needed makeover. However, from the look of things, it doesn’t look like the project is on schedule for an opening any time soon.

In the meantime, however, kids can play at “the Small Playground” to the east side of City Park near the Nature and Science Museum.

There are several special flower gardens with beautiful statues, fountains and outdoor art in all parts of the park. My favorite garden is the Rose Garden that sits between Ferrill Lake and the Nature and Science Museum.  This area was once known as Denver’ s first Botanical Gardens. 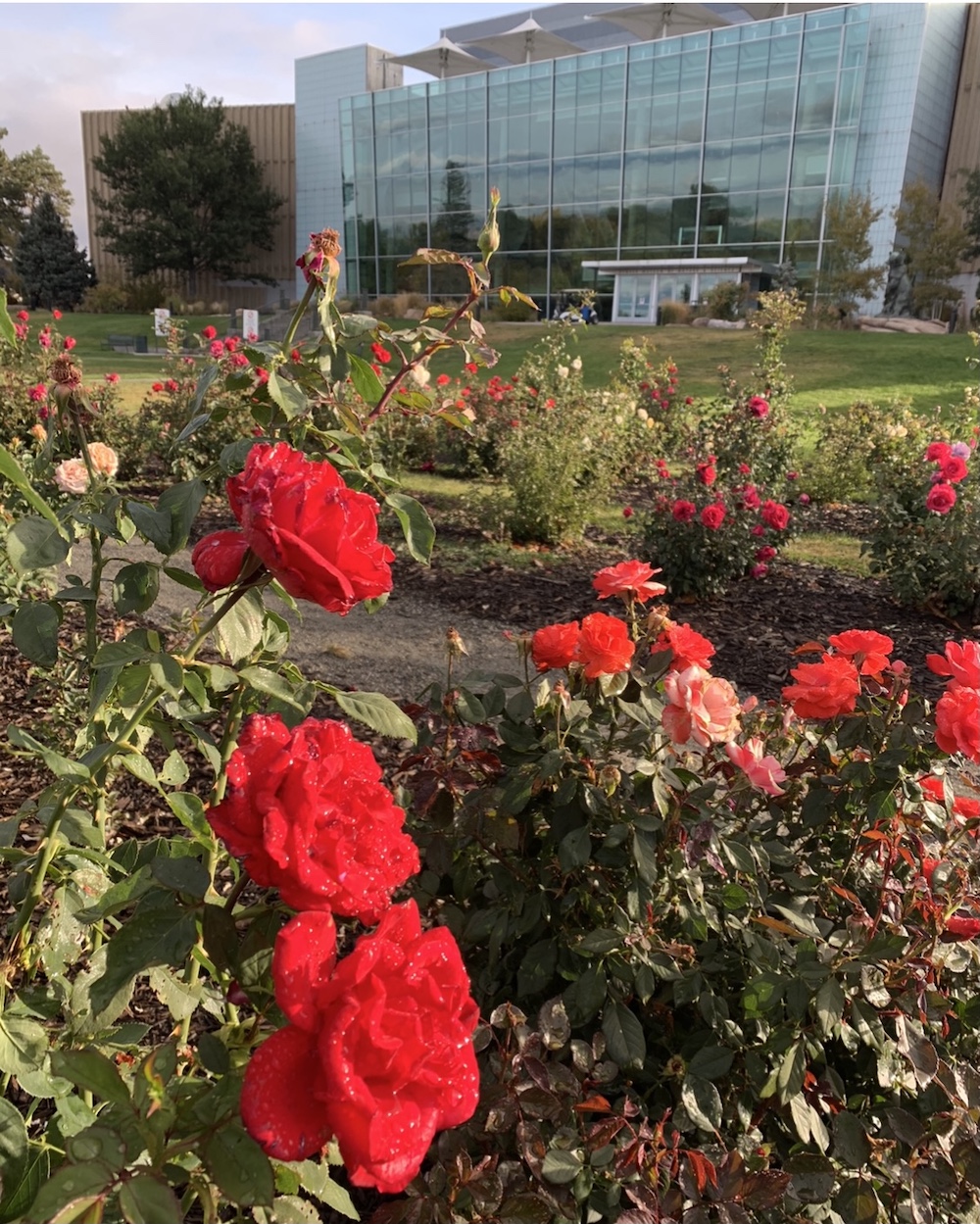 The colorful rose bushes look out on the serenity of the lake and majesty of the Rocky Mountains in a French-like symmetry with a circular center.   Denver’s own mini replica of the gardens of Versailles, this beautiful area of City Park insists that you, “take time and smell the roses!”

So, whether it is a snow filled morning or sun quenched summer day, it is always a good time to explore new adventures in the park. No visit is ever the same. These top ten highlights are just the start for all you will uncover at City Park.

One thought on “Denver City Park: Top Ten Things to Do & See”